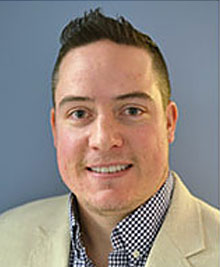 Patrick Barbieri joined Hemson in 2006 and has over 15 years of professional experience. Patrick manages the firm’s data requirements and is responsible for the graphic components of the firms planning practice. On a day to day basis, Patrick deals with data from municipalities, Statistics Canada, CMHC and various other sources. Patrick also assists the firms planning practice by managing working databases of employment land supply, office development, residential permit activity, population demography and growth forecasts.

After finishing his studies at the University of Western Ontario, Patrick completed the Real Property Assessment and Administration program at Seneca College. He is a member of the Institute of Municipal Assessors and plans to become a Professional Land Economist. He regularly attends workshops hosted by CoStar, Tableau, CMHC, Stats Canada and ESRI.

Patrick and his wife Johanne have two sons (Charles and Maxwell) and live in Oakville. He commutes via Go Transit and occasionally in the warmer months by cycling. In his free time, Patrick enjoys taking his boys to the park, golfing and cycling. Patrick is a member of ‘Team Fox’ and ‘Bikes Battle Parkinson’s’. He has completed many cycling trips including around Lake Ontario in 2010, to New York from Toronto in 2011, to Boston from Montreal in 2012, to Quebec City from St. John in 2015 and to Oakville from Sault Ste Marie in 2020.